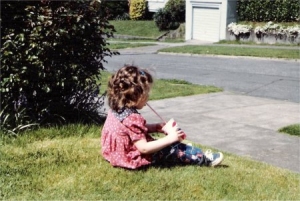 I was born in 1980. Since I was very small, I've loved to create things. These days, my interests include writing, photography, drawing, playing the piano, LEGO, and other forms of art.

From 1998 to about 2002, I attended Mt. Hood Community College and earned my associates' degree in general studies. In 2001, I transferred to Western Oregon University in Monmouth, Oregon, where I earned a B.S. in Humanities in 2003, with a writing minor.

While attending Mt. Hood, I was a part-time nanny for an adorable baby boy who is now all grown up. While at WOU, I worked as a notetaker and reader of books onto tapes for people with disabilities. From 2003 to 2007 I worked at an elementary school as a teacher's assistant, dealing with kindergarteners and sixth graders and every age in between. In 2006, I started nannying again. I spent the 2006-2007 school year nannying for three elementary-aged children. In late 2007 I nannied for my cousin's baby boy in Seattle. In January of 2008, I returned to the elementary school. I was there for two more years, then went to work at a middle school for a few months. I then spent another six months back at the elementary school (ping-pong ball much?) Then in 2011, I was hired at another elementary school, and I was there until 2015, at which point I returned to the first elementary school and... Yeah. That's where I am now. LIFE.

I have many creative projects going on at any given time. In July of 2010, I published my first novel, Just South Of Normal! Eight years in the making, I was really happy to finally see it in print! My most recent novel is called Caitlin The Magnificent, and it was released in May, 2020. I hope it will be the first of several in a series.

From 2007 to 2011 I wrote/directed/voiced a web series called Ella, More Or Less. I went through a phase of taking abstract photographs at playgrounds and I posted them on yet another website of mine: Playing Around Portland. These days I build a lot of things out of LEGO, many of which can be found here. If you want to stay informed of my latest exploits, be sure to read My Blog!

Favorite Movies: The Back to the Future trilogy, Beauty and the Beast, Indiana Jones and the Last Crusade, Peter Pan, Titanic, Pollyanna, Mary Poppins, The Parent Trap, Candleshoe, The Goonies, The Princess Bride, The Boy Who Could Fly, Flight of the Navigator, The Wedding Singer, Ever After, Pride & Prejudice, Little Women, My Girl 1 & 2, Robin Hood: Prince Of Thieves, Dear Frankie, and Anne Of Green Gables

Books I love: Just as Long as We're Together, Tiger Eyes, and Starring Sally J. Freedman as Herself, by Judy Blume; Bridge to Terabithia, by Katherine Paterson; Ella Enchanted, by Gail Carson Levine; Maniac Magee, by Jerry Spinelli; the Harry Potter series; Anne of Green Gables, by L.M. Montgomery; From The Mixed-Up Files Of Mrs. Basil E. Frankweiler, by E.L. Konigsberg; Pride & Prejudice by Jane Austen